These are turbulent times. As a species we have been deprived of touch and closeness, the primary vectors of human sociability. More than ever, it seems important to cherish the ones that allow us to connect to each other: sight and sound, speech and movement. To reach out and revel in shared memories, emotions. To celebrate what we had, and still have to varying degrees. At Eastman, we now celebrate ten years of existence, ten years of comradeship, connection, creation.

This April also marks ten years of Sidi Larbi Cherkaoui and Damien Jalet’s Babel(words): one of the major milestones in their long and extraordinarily rich collaboration, and the first Eastman production. A piece where Larbi and Damien brought together 43 people from 5 continents on stage across 144 performances, performances staged in cities as far-flung as Sydney and Seoul, New York and London, Montreal and Tokyo, Beirut and Berlin. A piece that explores the markers of identity - language, looks, attire, provenance - that have come under such scrutiny these last months, more than ever, often spelling the difference between safety and danger, expulsion and care — and sometimes, between life and death.

So, to celebrate yesterday and today, these ten years, to thank you all for sharing some of the rollercoaster ride with us, Eastman will be streaming Babel 7.16 worldwide. Babel 7.16 is the expanded, site responsive version of the original piece, staged at the legendary Cour d’honneur of the Palais des Papes in Avignon. Sparked by an invitation from Festival d'Avignon, directed by Olivier Py, it was presented at the 2016 edition of the festival.

Do join us for this ride as well. 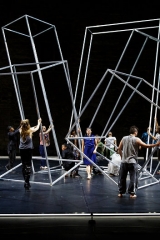