Zero degrees started as a desire of Sidi Larbi Cherkaoui to dance a duet with British-Bengali choreographer and dancer Akram Khan. Both are sons of Islamic families brought up in Europe, and both draw upon this meeting of cultures, combining complex Indian kathak dance with the speed and precision of contemporary movements.

Inviting Antony Gormley for the scenography and Nitin Sawhney for the live performed music; zero degrees became a place of transformation. Inspired by the place where one thing morphs into another, the grey zone between one thing and the next, the degrees where water becomes ice, the line where life becomes death. Zero degrees follows Cherkaoui and Khan on a journey to seek the reference point, the source, the '0' at life's core. Inspired by their own dual identities, the two search for this middle point through polar opposites; becoming/death, light/dark, chaos/order. Zero degrees talks about borders and how blurry they actually are.

With only two lifelike dummies, copies of Cherkaoui and Khan, the emptiness on stage permits the audience to see many symbols of division and unity within the choreography. The dummies are like alter egos, sometimes they are oppressors, sometimes guards or dead bodies.

Zero degrees is a performance about the fragility of a human life, about yin and yang. The piece has won a Helpmann Award in Australia and was nominated for a Laurence Olivier Award in the U.K. 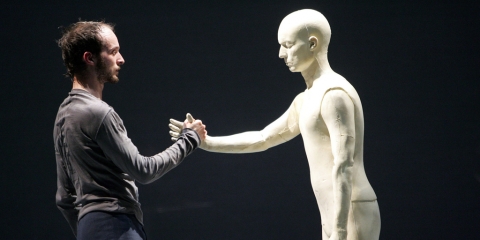