49-Jae is based on an idea developed with and for Korean dancer Namjin Kim. 49-Jae inspires itself on the 49 days a soul wanders around, after its body died according to Korean Mahayana Buddhism, before moving on to its next life. Namjin Kim incarnates the different stages one imagines going through during these 7 weeks of Joong-eum-shin: going from a state of bliss to disbelief, regret, anger and finally to acceptance of having died in order to be able to come back to life, or move on to the next stage.

Surrounded by paper screens that divide the world of the dead from the living, Namjin twirls and twists himself into shapes and feelings, trying to get hold of a body turned to dust. At the end he becomes a shadow, singing a mournful goodbye song, which echoes slowly in the voice of gifted Korean musician and composer Woojae  Park.

In honour of Korea during the bilateral season of cultural exchange, BOZAR (Brussels) and the Belgian Government commissioned four Belgian choreographers to make solos for four Korean dancers. 49-Jae was Sidi Larbi Cherkaoui's contribution to this event. Other choreographers were Thomas Hauert, Arco Renz and Michèle Anne de Mey. 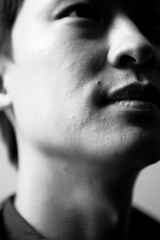