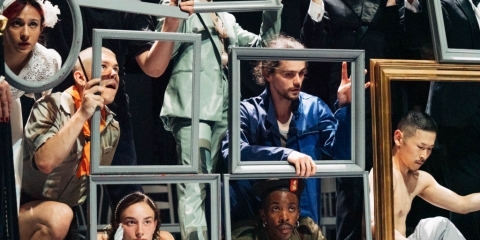 Dayan Akhmedgaliev is a dancer, choreographer, actor and dance teacher who comes from Moscow, Russia. He received an education in choreography at the College of Culture and Arts I.S. Palantaya in Yoshkar-Ola, and has over 12 years of experience in teaching contemporary dance himself, among others at the children’s ensemble Smile (Yoshkar-Ola) and at PROtancy Dance Center (Moscow). Between 2012 and 2016, Dayan danced with the Mari National Drama Theater and Mari El, the Mari State Folk Dance Ensemble. As a performer he competed in season 3 of Dancing on TNT (2016), Russia’s largest dance television show, in which he made it to the finals. After this great success, he reappeared on season 6 of the show as one of the choreographers. He was an actor in Faceless (2017) by Miguel, Mia Zanetti, and Victor Carina, danced in Liasan Utiasheva’s BOLERO (2019) and in Sidi Larbi Cherkaoui’s Vlaemsch (chez moi) (2022). Dayan has numerous victories to his name in major dance championships and battles, among others at ATMOSPHERE BATTLE 2021 (Kyiv), FAME YOUR CHOREO 2019 (Moscow), and Russian Krump 2019/2020 (Anapa).